It had almost been a full two years since Tom and I had headed over seas since our last backpacking trip around South East Asia. For those of you who have been following along, this was really unusual for us and a first in many years to go so long without traveling. The reason? We were getting married!

You may have noticed I haven’t written a blog post since we arrived back in Australia because to be honest, it was difficult adjusting to life being lived in one spot after we had been on the move for so many years. I didn’t feel like I had much to write about since we weren’t experiencing different cultures, sights and sounds on a daily basis any more. We were back in the ‘real world’. This definitely hasn’t been a bad thing, but we were  starting to get itchy feet and craving the feelings you get whilst travelling.

Tom proposed to me in December 2016 at one of our favourite places- the beach. We quickly began planning our dream wedding before trying to decide where we should go for our honeymoon. It was a really difficult choice because there were so many places we wanted go and we only had a limited time of two weeks, which was crazy for us since we usually have several months to explore new places.

We didn’t want a stereo-typical honeymoon, where you stay in a fancy resort, lay by the pool and never leave the grounds of your resort. This just isn’t us and we would be bored within the day. We wanted some where that had beaches, hikes, culture, amazing food, a mix of luxury and adventure and breathtaking views. After plenty of research, we discovered that Hawaii seemed to tick all of these boxes. We were definitely right too, it was the best decision to go there!

We managed to get a cheap flight over there with Jet star and as we were going in October, which is the off season, we managed to get very reasonably priced accomodation. After the long 10 hour flight from Brisbane to Honolulu, we arrived tired and starving to the very hot and humid state of Honolulu. We had another flight to catch with Island Air to the island of Kauai (known as the garden Isle) where we would be spending the first 7 days of our 10 day honeymoon. The flight was a quick 30 minutes over stunning views to get there. We arrived at 10am to torrential rain and high winds.

Trying not to be dishearten by the rain, we got our free shuttle to Dollar car rental where we picked up our car for the week. Again, we got a great price of $380 USD for 7 days. Since this was our honeymoon, there was going to be no hostels in sight! Instead we were going to be staying at The Hilton Garden Inn, Kapaa.

There is basically three sections to Kauai you’ll want to know about when deciding which area you want to be staying in. There’s the North shore, which is in the North (obviously) which is more untouched, has insane scenery, great surf and hikes, but tends to be a bit more rainy. Then you have other towns such as Kapaa, which is in between the North and South, which are a bit more built up than the North shore, a little less rainy and has lots of food trucks (which we LOVE!). Finally you have the South with towns like Poi pu which are more touristy, have lots of resorts and tend to be the sunniest out of all the areas. We chose to stay in Kapaa to minimise the amount of time we would be driving each day. Since there were places to see in the North and the South, staying in the middle seemed like the best option.

Since it was still early, we couldn’t check in yet. After being in the same clothes for over 12 hours, this was really annoying. All I wanted was a shower. Instead, we got back in our car and headed out in the search of coffee. It’s really hard to find a good coffee in the USA, most places just serve drip coffee, unless you go to Starbuck (no thanks). Being an Australian and a Barista, my coffee standards are very high. Only a short drive down the road we stumbled across Imua coffee roasters which was serving up fresh espresso and had free wifi. This place didn’t disappoint and became our favourite place for coffee during our stay in Kauai.  It was also right near the beach, so some mornings we got our coffee to go and drank it right on the beach. Two of my favourite things at the same time!

Due to the weather, our first day was basically a write off. We drank coffee, napped, enjoyed the luxuries of our hotel, went out for dinner and called it a day. The next day’s weather was much better and we set off on our first Hawaiian adventure to Waimea Canyon and Kalalau lookout. The views were insane and even more amazing than I could have imagined. Waimea canyon made me feel so insignificant with its sheer size and beauty. I never knew so many colours could exist within a Canyon.

Pictures from the Kalalau lookout were actually what had inspired our whole trip to Kauai and we couldn’t wait to see that view of the Napaali coast. We were worried it would be cloudy due to the altitude and time of day. We had been advised to go early in the day but due to our jet lag we had accidentally slept in. Winding further up the mountain, the clouds were definitely starting to come in. We somehow managed to get lucky and had a full five minutes of the stunning view we had longed to see before the clouds came in and covered it all. It was so surreal, seeing that postcard view through my own eyes. The ocean was as blue as you could imagine and the jagged  mountains were some of the most beautiful I have ever seen. It is definitely up there with one of my favourite views from our travels.

Now that we had ticked those views off our list, it was time to make a day trip to the North Shore. The town of Hanalei to be exact. The weather was not the best on this day and rained on and off but that didn’t stop us from enjoying the North Shore. Hanalei bay is exactly that, a bay surround by beautiful mountains, a cute and colourful town and some great surf. We strolled along the beach and walked into town where we tried one of Hawaii’s famous treats- Shave ice. We got it from Jojo’s Shave ice which is one of the most famous on the island. It was bigger than my head so I suggest sharing it with someone. It was delicious!

That night we headed to a tradition Hawaiian Luau! We opted to go to the Smith family Luau due to the amazing reviews online and we were definitely not disappointed. It wasn’t cheap but you definitely got your value for money with free hotel transfers, a tram ride around the beautiful grounds, demonstrations of the traditional cooking of Kalua pork, a delicious all you can eat traditional Hawaiian buffet, unlimited Mai thai’s and a Hula and fire show. It was a really fun night that taught us a lot about the Hawaiian culture, I couldn’t recommend it more.

The next day, we would be doing a 11km hike on the Awa’awapuhi trail. I’m not going to lie, it was hard. We started off early at around 7am. It was mostly all down hill on the way there with not too many good views in sight. We were slipping around in the mud, stumbling over tree roots and wading through itchy grass higher than our heads. When we finally reached the view point, I could have cried. The view was 100% worth the hike. Again, the ocean was impossibly blue and the mountains were raw, jagged and humungous in size. We sat up there for what felt like ages, soaking in the views and taking pictures. Since the hike was all down hill on the way there, yep you guessed it, it was all up hill on the way back. It was much hotter as it was later in the day and for some reason hikes always seem longer on the way back. We were insanely happy once we reached the car park, tired, out of breath and soaked in sweat. We definitely earned the long nap we had that afternoon. 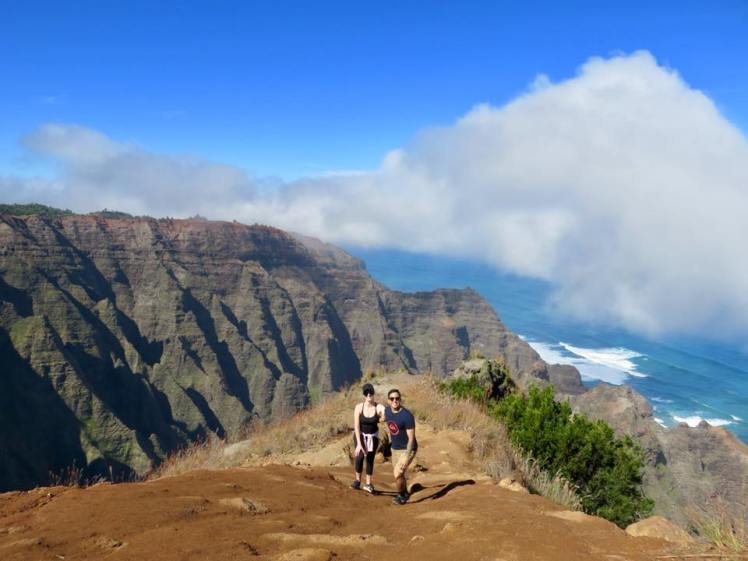 The rest of our time in Kauai was spent at the beach. As Poi pu was always more sunny, we headed there. The first day we spent it at Ship wreck beach, which was really beautiful. We spent the entire day here and even watched the sunset with a Pina colada in hand. It was the perfect day. 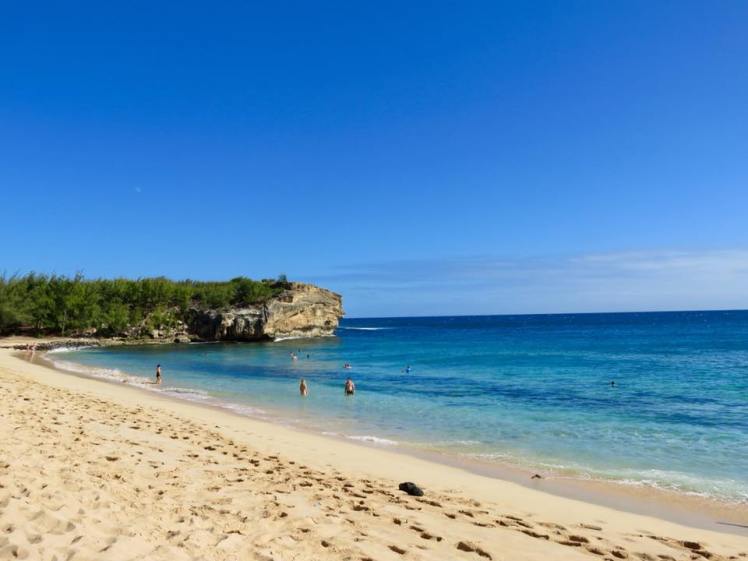 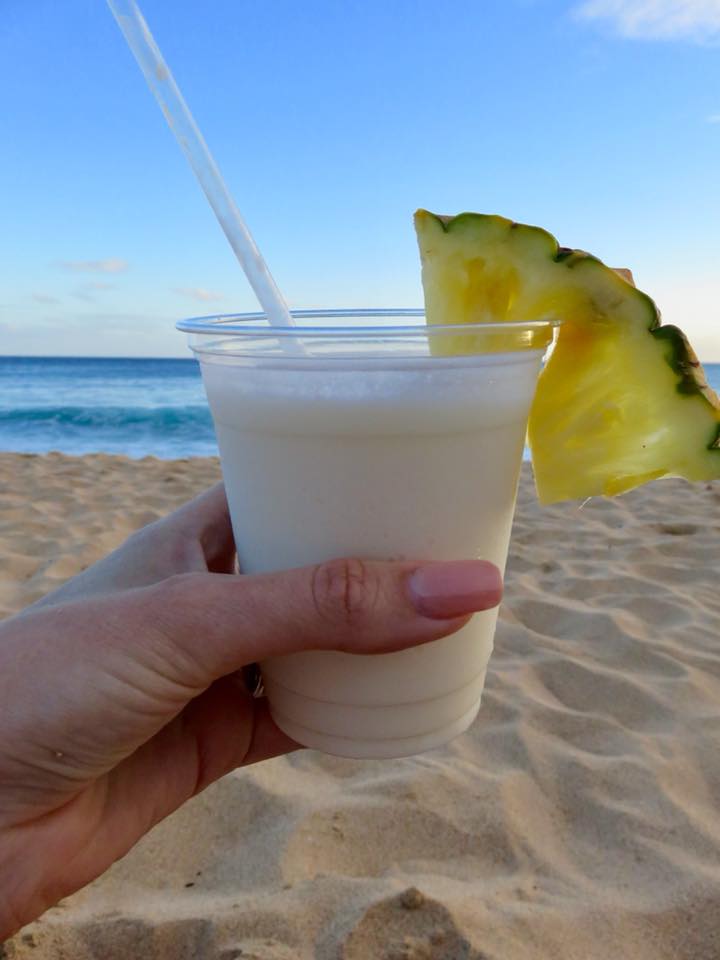 Another favourite beach was Poi pu beach park. The water was clear, warm and full of- seals! Yep, you read that right. There were a few seals sun baking on the sand in amongst all the beach goers. There were seal volunteers near by making sure people kept their distance and the seals were safe. Tom and I were chatting and swimming when suddenly I saw something big and black in the corner of my eye. I passed it off thinking it was probably someone in a wet suit as there are lots of people spear fishing in the area. I looked up again to see a HUGE seal swimming past us less than a meter away trying to make its way to the sand. It was so surreal, I never imagined to be swimming with a monk seal at the beach! 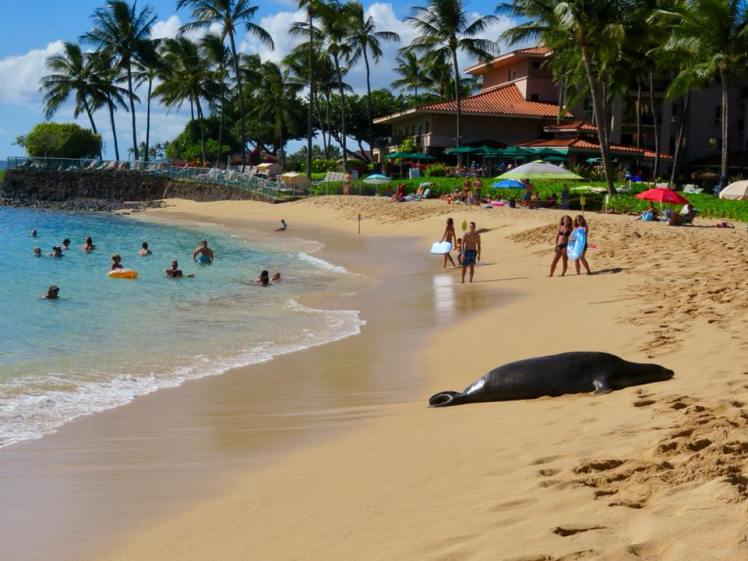 We loved every minute of Kauai and felt that we got to experience the true customs and cultures of Hawaii within our 7 days there. I would definitely like to return one day. I hope it keeps it charm, slow island ways and it’s policy not to build anything higher than the tallest coconut tree. If you want to see true Hawaii -add it to your list of places to visit now!

Our favourite places to eat: