One thing we didn’t know about Argentina, was how valuable American dollars are here. We heard the word a few times from different people along the ‘Gringo’ trail that if you change (cambio, in Spanish) US dollars in Argentina they will exchange it for you at a higher rate on the streets, you just have to watch out for fake bills. We got out a bunch off US dollars from the Atm in La Paz, Bolivia and googled and asked at our hostel how to spot fake notes then hit the streets in Salta, Argentina to test out if this theory was in fact true.

There were quite a few men standing on the streets practically whispering to you in a seedy voice saying ” cambio, cambio” in the same way in La Paz they try to sell you drugs on the street “marijuana, marihuana” “cocaina, cocaina”. It just seemed really strange to me. We didn’t know which seedy guy to choose. A young Argentinian came up to us and gave us a flyer for a restaurant then asked us what we were doing. We told him we were trying to change our money. “Come with me” he said. He took us to this man a few blocks away in this strange little office, it said on the door he was a doctor. He assessed our money then gave us the Argentinian Pesos. It was all on the hush hush and felt like we were doing some kind of drug deal.
He exchanged at he rate of 1USD = 8.75ARS ( Argentinian pesos), whereas in the banks they were exchanging 1USD = 5.77ARS. We walked out of there USD $500 richer.  Needless to say we went there the next day to exchange more money.
Once we got to Buenos Airies we had used all our pesos we had changed. You can’t get US dollars out of the ATMs in BA. We had already planned to do a day trip to Uruguay so this worked out perfectly! We managed to get out some money there from the atm. Tom did all the maths (I don’t  understand any of it) and worked out that if we exchanged $1000 USD at a higher exchange rate we could in fact essentially get our apartment we had booked for free!
Avenida Florida in BA is notorious for exchanging money. There are hundreds of men and women lining the streets shouting out “cambio, cambio”, not like salta were is was a seedy whisper. We chose a decent looking man and asked for the exchange rate. This guy was exchanging at 1USD = 9.40 ARS (you get more if you have $100 bills) he took us to another guy who took us into a building and up the elevator. We marched down the hall into a creepy looking room with literally nothing in it  buta cupboard and he locked the door. “Oh shit, he is going to rob us” I thought.  Next minute he opens the cupboard which had some crazy money machine in it. He typed in the amount and out came $9,400 ARS. We made $700 USD from this which makes our apartment for free with some more money to spare.
Is this legal? I think so. What’s the catch? There isn’t one as far as we can see. At one point the Argentinian Peso was at parity with the USD. As time has past, the value of the peso has slowly declined to the price it is today. The ‘Blue dollar’ black market price will continue to grow as the fear of the peso losing value grows stronger. This fascinating stage in the Argentinian financial world will one day pass and if you know how to work the system and change some dollars, you could get your entire trip including flights for free.
So the moral of the story is, if you’re going to Argentina go and get your US dollars out NOW!  🙂 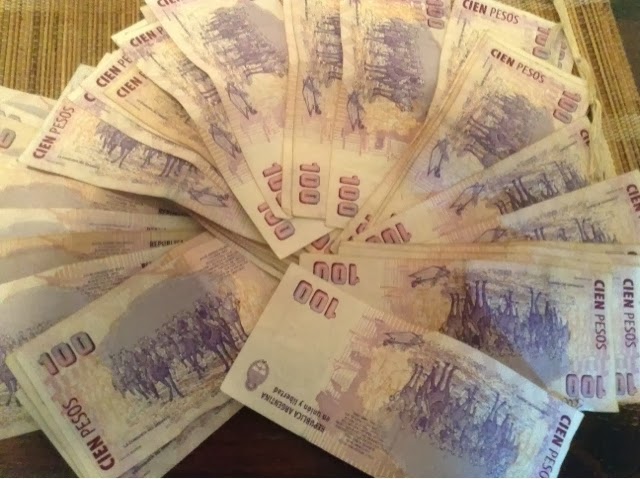