After searching around for the cheapest bus ticket to Mui Ne from Ho Chi Minh, we finally found one for 90,000 VND ($5.50 AUD). The weird thing was though, it was a sleeper bus which mean our seat reclined almost the whole way back and the bus had bunk ‘beds’ like a dorm room. This is a really common way to travel overnight  in Vietnam for long distance travel but this bus ride was only 5 hours and during the day. I’d heard plenty of stories about these sleeper buses and the most common theme was forcing the westerners into the shittiest seats on the bus (top seats, down the back near the toilet). Sure enough this exact thing happened! I was trying to sit on a bottom bed 3 seats from the front when the lady started yelling at me telling me it was “full”. I told her it can’t be as we weren’t allowed to pre select seats. She kept yelling at me telling me to take a top bed at the back and I kept yelling back saying no. Finally I yelled “I need to sit at the front, if I sit at the back I wil throw up everywhere”.  She rolled her eyes, said “ok” and walked off. The moral of the story: stand your ground. Just because you are a tourist doesn’t mean you have to take the worst seat!
After five hours in our weird but comfortable beds, we arrived in Mui Ne. Mui Ne is a small fishing, sea side town full of resorts, hostels and giant sand dunes. It wasn’t originally in our itinerary but since we now had extra time in Vietnam we decided to add it to the list. I’m glad we did!

We stayed at a really cool, social hostel called Backpacker village which had a beautiful big pool, a restaurant and a bar with an all day happy hour. It was such a treat to be able to cool off in the pool. The town itself is quite small with not a lot going on. The beach is famous not only for fishing but for its kite surfing, so naturally is not as nice for swimming as its rough and windy. 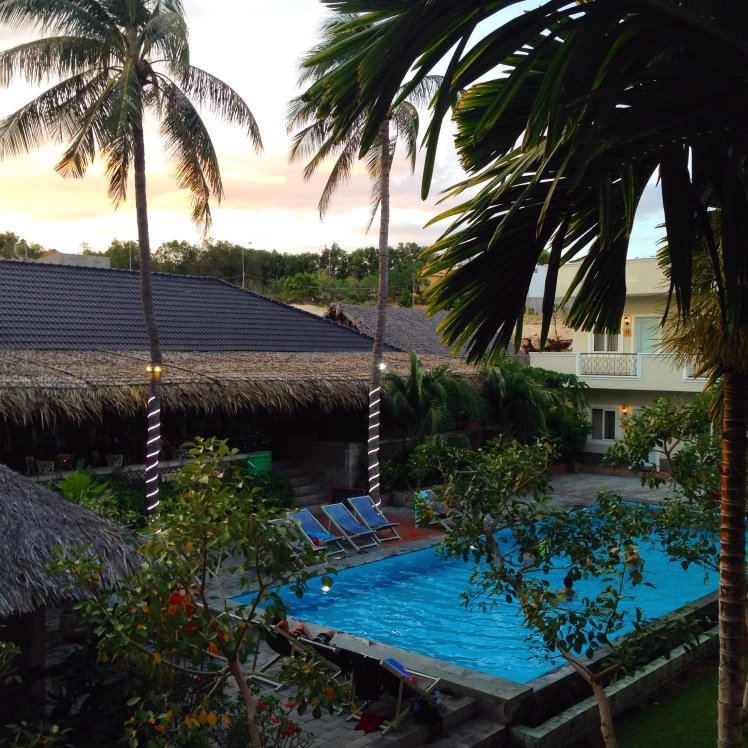 A big attraction here is the sand dunes. They have two, the red and the White. Our hostel offered a tour for $4! The jeep picked us up from our hotel and as per usual, they some how squeezed 8 of us in there. It was a very hot and sweaty ride especially since I was the only girl amongst 7 guys! Oh, did I mention the jeep was falling apart and the accelerater pedal was a spoon?!

Our first stop was the fairy stream. Our tour guide turned out to just be our driver since he didn’t speak any English and just left us to our own devices. We found ourselves walking down a brown stream that strangely smelt like fish sauce. It was hot and we were all complaining and wondering how on earth this could be a tourist attraction. Then, we turned a corner and were met with stunning views! Now I could see why we were here. 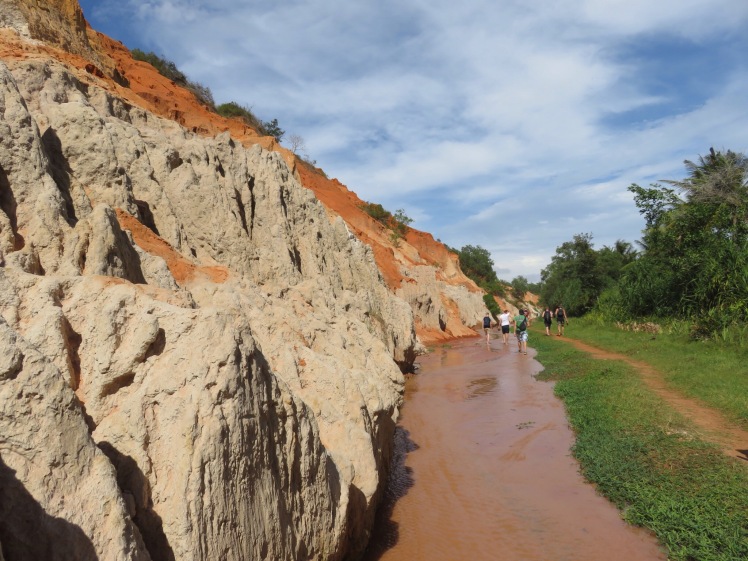 Next up was a view point of a local fishing village. It was so interesting to see. I had never seen so many fishing boats all in one spot. How do they find their boats amongst all of these? 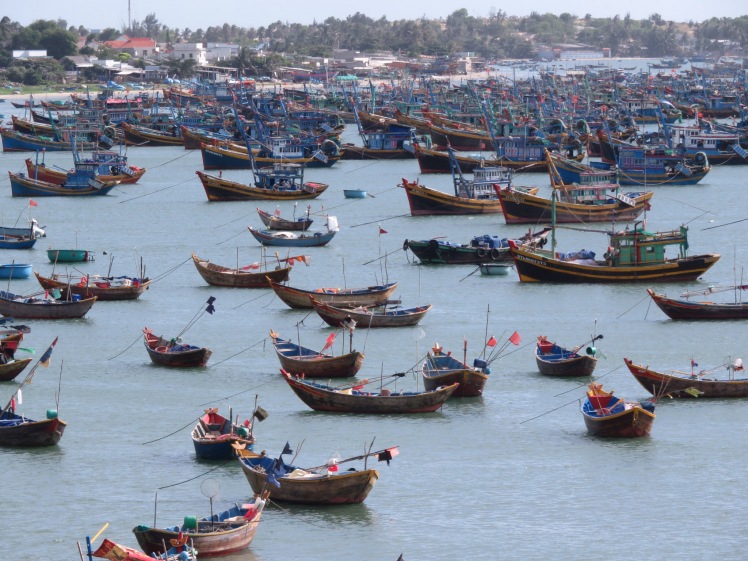 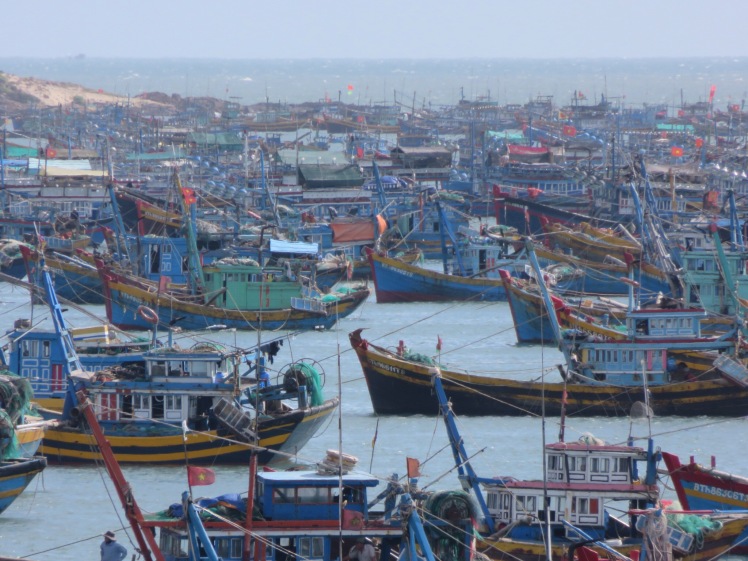 Then it was a 25km drive out to the magnificent white sand dunes. Once we arrived, their were guys renting out atv’s. They were a little expensive and we didn’t have enough cash on us so we decided to walk up. We could probably do with walking after all the noodles we had been eating any way! It was an amazing sight to behold. There were white sand dunes as far as the eye could see, most of it untouched without a single foot print. I felt like I was lost in a desert somewhere. I had no idea Vietnam had anything like this. It was a very cool experience. 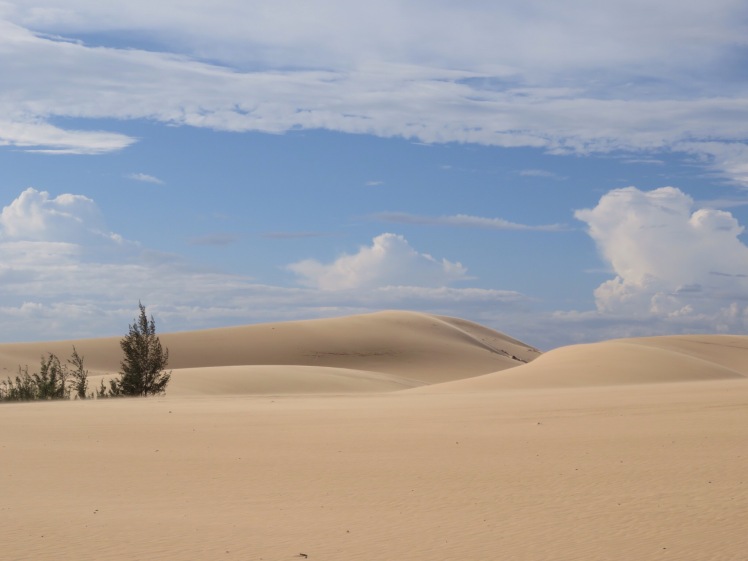 Finally, we hoped on the sweaty jeep again and made our way to the red sand dunes to watch the sunset. These dunes were not as beautiful. They were smaller and unfortunately littered with trash. Their were children renting out plastic sheets to slide down the hill with. It was very entertaining to watch people try and do this. As we sat and watched the sunset with beers in hand, the wind began to pick up. This made it extremely unpleasant and the sand was blowing everywhere. I can honestly say I have never been so sandy before, there was still sand in my ears days later!

Aside from the sweat and the sand, this was a really great tour that I thoroughly enjoyed. We met some awesome people and saw some truly stunning views. After a short two days, it was time to move from the ocean to the mountains. Next up, Da Lat!

One thought on “The sand dunes of Mui Ne, Vietnam”